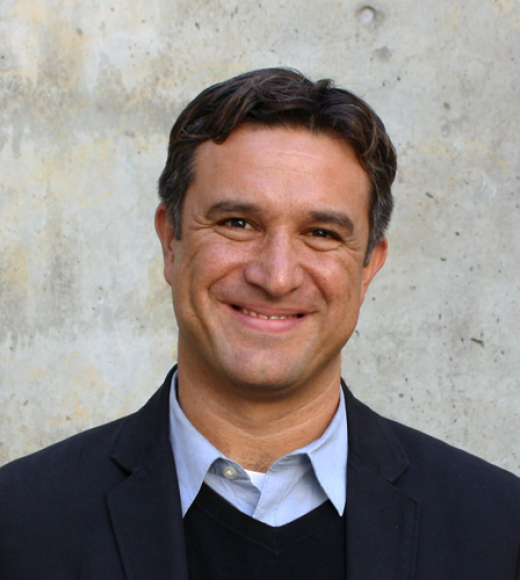 Jaimey Fisher is Professor of German and Cinema and Digital Media. He studied German literature and thought at Stanford University, at the Freie Universität Berlin, and at Cornell University, where he received his Ph.D. with an emphasis in German intellectual history as well as in Film and Video Studies. His primary research and teaching interests include film and media studies, German literature, and intellectual history.

Prof. Fisher is the author of four single-authored books: German Ways of War: The Affective Geographies and Generic Transformations of German War Films (Rutgers UP, 2022); Treme (Wayne State University, 2019), Christian Petzold (University of Illinois, 2013) and Disciplining Germany: Youth, Reeducation, and Reconstruction after the Second World War (Wayne State University, 2007). He has also edited or co-edited seven books or special issues, including on film (The Modern City in World Cinema (Telos special issue 2021); Berlin School and its Global Contexts: A Transnational Art Cinema [2018, Wayne State UP]; Generic Histories of German Cinema: Genre and its Deviations [2013, Camden House's Screen series], and Collapse of the Conventional: German Cinema and its Politics at the Turn of the Twenty-First Century [2010, Wayne State UP]) as well as on literature and theory (Spatial Turns: Space, Place, and Mobility in German Literary and Visual Culture [2010, Rodopi] and Critical Theory: Current State and Future Prospects [2001, Berghahn]). He is now working on a project on media, especially television, and democratization in the Germanys and Austria in the 1950s and 1960s.

He has also published over 50 articles and book chapters, including in the journals New German Critique, The German Quarterly, Seminar, Iris, The Goethe Yearbook, and Zeitschrift für Germanistik, among others.

Prof. Fisher teaches courses at UC Davis in German and Cinema and Digital Media, on topics ranging from Bertolt Brecht to contemporary European cinema. He has also developed a summer-abroad course for UC Davis, entitled "World Cinema and the European Film Festival," which travels to the Locarno Film Festival in southern Switzerland/northern Italy. At UC Davis, Prof. Fisher is an affiliated faculty member in Critical Theory, Cultural Studies, Performance Studies, and Jewish Studies.

Before coming to Davis in 2004, Prof. Fisher taught at Tulane University as an Assistant Professor of German. He has held two fellowships from the German Academic Exchange Service (the DAAD) and was awarded a Federal Chancellor (Bundeskanzler or Buka) Fellowship from the Alexander von Humboldt Foundation; he has also PI’d (as Lead PI) assorted grants from the Mellon Foundation, the National Endowment of the Humanities, and California Humanities.

German Ways of War: The Affective Geographies and Generic Transformations of German War Films(Rutgers UP, 2022)

Editor, German Ways of War: The Affective Geographies and Generic Transformations of German War Films(Rutgers UP, 2022)

Co-editor, The Collapse of the Conventional: German Film and its Politics at the Turn of the

“Disputations from a Damaged City: Spike Lee’s If God is Willing and the Creek Don’t Rise (2010) and the Taking Place of Civil Society in Post-Katrina New Orleans,” Telos 197 (Winter 2021), “Special Issue on The Modern City in World Cinema,” eds. Jaimey Fisher and Sheldon Lu, 101-23.

“Ghosts at an Early Age: Youth, Labor, and the Intensified Body in the work of Christian Petzold and the Dardennes,” in eds. Marco Abel and Jaimey Fisher, Berlin School and its Global Contexts: A Transnational Art Cinema (Wayne State UP, 2018) 271-292.

“Film and Affect, Theories Entwined: The Case of the War Genre in Saving Private Ryan (Steven Spielberg, 1998),” in eds. Donald Wehrs and Thomas Blake, The Handbook on Affect Studies and Textual Criticism (Palgrave, 2018). 509-535.

“Petzold’s Phoenix, Fassbinder’s Maria Braun, and A Melodramatic Archeology of the Rubble Past,” in Senses of Cinema: Dossier on Christian Petzold Fall 2017: (translated, English version of #4 essay below, but Senses is refereed).

“German Historical Film as Production Trend: European Heritage Cinema and Melodrama in The Lives of Others” in The Collapse of the Conventional: German Film and its Politics at the Turn of the Twenty-First Century, ed. Jaimey Fisher and Brad Prager (Wayne State University Press, 2010).

“Adorno’s Lesson-Plans? The Ethics of (Re) Education In “The Meaning of ‘Working through the Past”,” in Gerhard Richter, ed., “Language Without Soil”: Adorno and Late Philosophical Modernity (Fordham University Press, 2010).

“On the Ruins of Masculinity: The Figure of the Child in Italian Neorealism and the German Rubble-Film,” in Laura E. Ruberto, Tomas Taraborrelli, and Kristi M. Wilson, eds., Radical Fantasy: Italian Neorealism’s Afterlife in Global Cinema (Wayne State University Press, 2007).

“Bombing Memories in Braun’s Zwischen Gestern und Morgen (1947):Flashbacks to the Recent Past in The German Rubble-Film,” in William Rasch and Wilfried Wilms, eds., Bombs Away: Representing the Air War over Europe and Japan, in series Amsterdamer Beitraege zur neueren Germanistik (Rodopi 2005): 329-43.