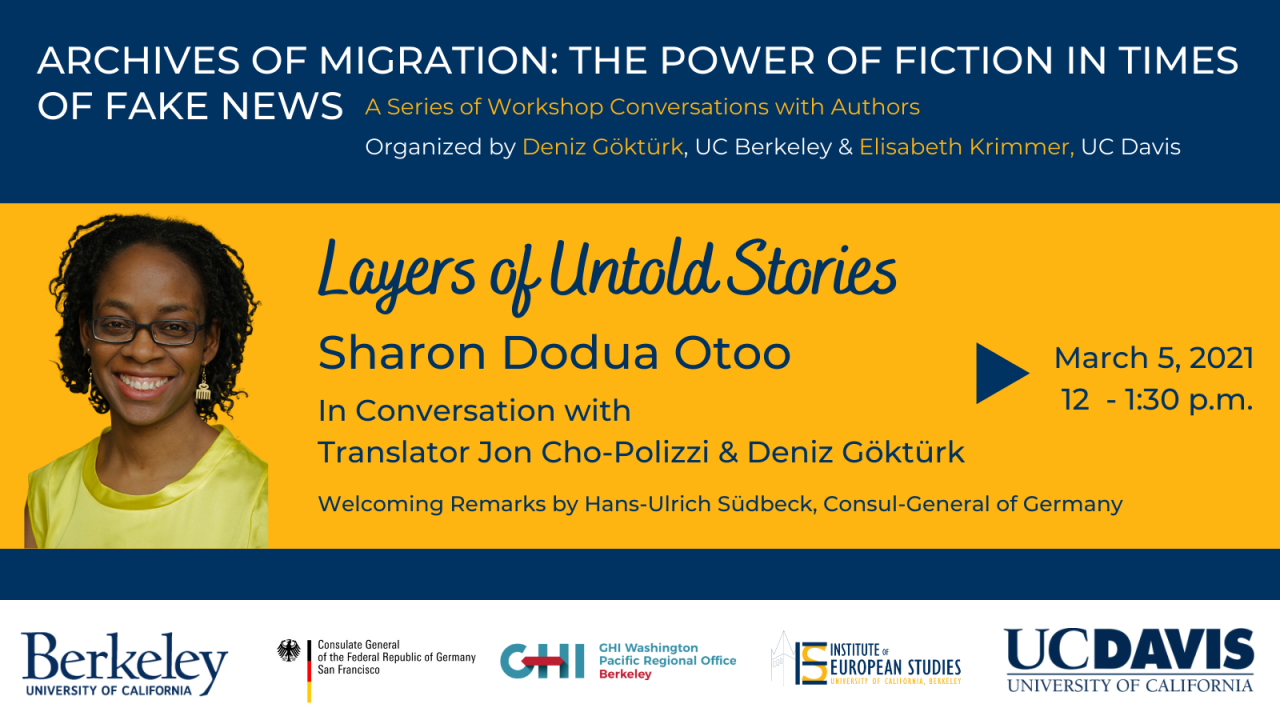 Archives of Migration: The Power of Fiction in Times of Fakes News

ARCHIVES OF MIGRATION: THE POWER OF FICTION IN TIMES OF FAKE NEWS

In spring 2021, we hosted a series of conversations with contemporary writers titled “Archives of Migration: The Power of Fiction in Times of Fake News.” Organized jointly by Professors Deniz Göktürk and Elisabeth Krimmer (University of California, Davis, German Program), this series has been supported by the German Consulate General San Francisco and co-sponsored by the German Historical Institute Pacific Regional Office, and the Institute for European Studies at UC Berkeley. The series will be continued in fall 2021.

Engaging in conversation with writers who bring diverse perspectives to questions of societal polarization and the power of poetic imagination, this series presented opportunities to experience contemporary literature in action and think about questions of truth in fiction. The pandemic has kept writers and academics homebound and hooked on screens for over a year, depriving us of public events and in-person stimulation. Still, the lockdown has also been a time to read and connect, facilitating opportunities for remote collaborations, regionally and across continents. As nation-states around the globe have been reinforcing their borders, this series of literary conversations focused on border-crossing stories. Our series aims to complement the historian’s use of archives by asking how writers activate, animate and reimagine historical source materials.  Conversations with three writers based in Berlin, Germany, addressed such questions based on readings from their recent works. Creative engagement with personal and public memories lost and found in the dispersed multilingual archives of migration can inspire new forms of civic participation and resistance to totalizing world views.

Video recordings of the events are available for viewing below. 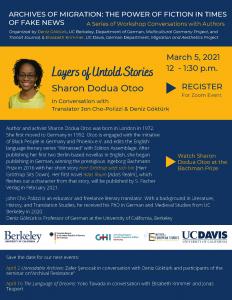 Author and activist Sharon Dodua Otoo was born in London in 1972 and moved to Germany in 1992. Otoo is involved with the Initiative of Black People in Germany and Phoenix e.V. and edits the English-language literary series “Witnessed” with Edition Assemblage. After publishing her first two Berlin-based novellas in English, she began publishing in German, winning the prestigious Ingeborg Bachmann Prize in 2016 with her short story Herr Gröttrup setzt sich hin [Herr Gröttrup Sits Down]. Her first novel Adas Raum [Ada’s Realm], which fleshes out a character from that story, was published by S. Fischer Verlag in February 2021.

Just one week after the book launch in Berlin, the event on March 5 was the launch of the book in English language.

Jon Cho-Polizzi is an educator and freelance literary translator. With a background in Literature, History, and Translation Studies, he received his PhD in German and Medieval Studies from UC Berkeley in 2020.

Link to blog posts on the Multicultural Germany Project: 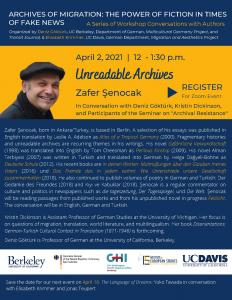 Zafer Şenocak in conversation with Deniz Göktürk, Kristin Dickinson (University of Michigan), and participants of the seminar on “Modern German Literature: Archival Resistance”

Zafer Şenocak has been publishing poems and prose in German since 1979. He has held appointments as a writer in residence at various universities in France, Canada, and the United States. His works have been translated into many languages. A selection of his essays was published in English translation by Leslie A. Adelson as Atlas of a Tropical Germany (2000). Fragmentary histories and unreadable archives are recurring themes in his writings. His novel Gefährliche Verwandtschaft (1998) was translated into English by Tom Cheesman as Perilous Kinship (2009). His novel Alman Terbiyesi (2007) was written in Turkish and translated into German by Helga Dağyeli-Bohne as Deutsche Schule (first edition published in 2012; second, revised edition published in 2019). His recent books are In deinen Worten: Mutmaßungen über den Glauben meines Vaters (2016) und Das Fremde, das in jedem wohnt: Wie Unterschiede unsere Gesellschaft zusammenhalten (2018). He also continued to publish volumes of poetry in German and Turkish: Der Gedanke des Freundes (2018) and Kıyı ve Kabuklar (2018). Şenocak is a regular commentator on culture and politics in newspapers such as Die Welt, die tageszeitung, and Der Tagesspiegel. He is currently working on a new novel titled Eurasia.

Kristin Dickinson is Assistant Professor of German Studies at the University of Michigan. Her research and teaching focus on questions of migration, translation, world literature, and multilingualism. Her book Disorientations: German-Turkish Cultural Contact in Translation (1811-1946) is forthcoming in May 2021 with Penn State University Press.

Link to blog posts on the Multicultural Germany Project:

Elizabeth Sun: Imagining the Other Side of Things: Zafer Şenocak and Hidden Archives

The Language of Dreams 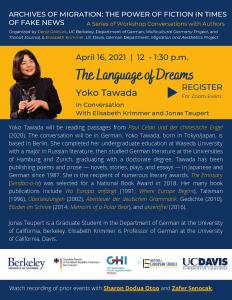 Yoko Tawada, born in Tokyo/Japan, is based in Berlin. She completed her undergraduate education at Waseda University with a major in Russian literature, then studied German literature at the Universities of Hamburg and Zurich, graduating with a doctorate degree. Tawada has been publishing poems and prose—novels, stories, plays, and essays—in Japanese and German since 1987. She is the recipient of numerous literary awards, including the Akutagawa Prize, the Lessing Prize, the Adelbert von Chamisso Prize, the Kleist-Prize, and the Goethe Medal. The Emissary (Sendbo-o-te) was selected for a National Book Award in 2018. Her many book publications include Wo Europa anfängt (1991; Where Europe Begins), Talisman (1996), Überseezungen (2002), Abenteuer der deutschen Grammatik. Gedichte (2010), Etüden im Schnee (2014; Memoirs of a Polar Bear), and akzentfrei (2016).

Links to blog posts on the Multicultural Germany Project:

Join us Oct. 14th for the 7th Annual Templeton Lecture by Edyta Bojanowska

Welcome Back! The Undergraduate Advising Team has missed you! Fall quarter is here and we are ready to see you and help you navigate being back on campus. We have a hybrid schedule, please click here for more information.